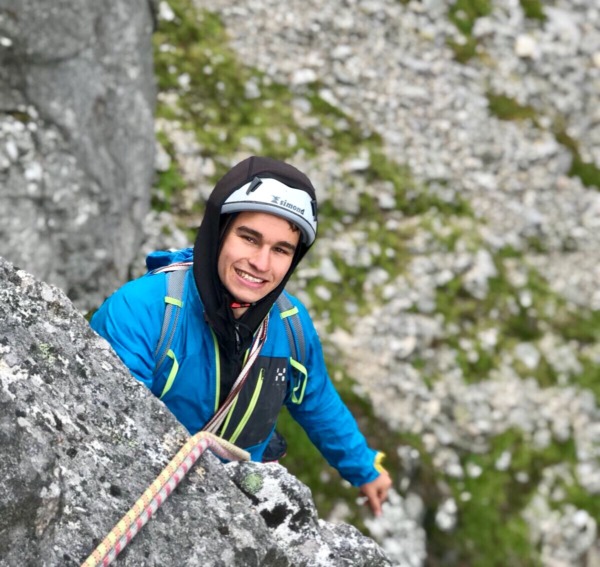 From the very first days being coached at the Glasgow Climbing Centre Tim Miller was hooked, quickly becoming a passionate, strong and competent climber and making a name for himself on the competition scene in the city. In 2013, in his first foray into competitive dry tooling, he won the Junior Scottish Tooling Series. With very limited ice climbing experience, he placed 4th in the Youth Ice Climbing World Championships in Champany en Vanoise, France, the following year.

However, when Tim made the transition into outdoor climbing he found his true calling. In a climbing career, spanning less than a decade, he has already had many epic alpine and mountaineering adventures – numerous hard traditional and winter ascents and demanding test pieces and first ascents, including grade 9 winter ascents. He has also undertaken many technical expeditions to the Greater Ranges [the high mountain ranges of Asia] where he has climbed up to 7000m on new routes and unclimbed peaks.

Tim has not only dedicated time to honing his own skills. From the age of 19 he has dedicated a great deal of time to passing his knowledge onto the next generation of climbers. Tim went to school at The Glasgow Academy, which has a leading outdoor education programme. Upon his graduation Tim began giving back to the programmme, volunteering his own time to work with the young climbers coming through the school. His calm, friendly, polite and deeply knowledgeable personality makes him an excellent instructor, always leaving the kids excited for more climbing.

Through working with the school and getting a taste for teaching and instructing Tim has focused his efforts into learning and gaining the experience he needs to make a life out of guiding and climbing instruction. At the age of 23 Tim Miller recently passed The Mountaineering and Climbing Instructor Scheme qualification, the highest level of qualification awarded by the Mountain Training UK – the collection of awarding bodies for skills courses and qualifications in walking, climbing and mountaineering in the UK and Ireland. He is now working towards becoming one of the youngest people ever to be accepted on the British Mountain Guides training scheme. Tim is a member of the Association of Mountaineering Instructors.

Tim now runs a successful guiding and instructing business, Miller Mountain Guides, taking his passion for both teaching and climbing into the mountains.